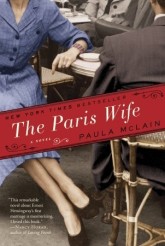 The Paris Wife is a brilliant fictionalized account of Hemingway’s marriage with his first wife Hadley. They meet at a party in Chicago and after several months of frantic correspondence and two encounters, they decide to get married. But, their fate is somehow doomed from the beginning. Ernest is a courted, blooming young artist who has just returned from the war, while Hadley is a 29-year old virgin, living with her sister and brother-in-law.

The couple moves immediately to Paris where all the important writers reside. The narrator captures Hadley’s desperate attempt to cope with her role as a wife and active supporter of Ernest’s writings. Although accepted in the literary circles, she often finds herself secluded with the other housewives, at the margin of all the important discussions.

Their life seems an endless partying and meetings with Gertrude Stein, Ezra Pound or Fitzgerald in little French cafes or at private soirees. The couple lives by Hemingway’s work as a journalist and published author, and despite living in shabby Parisian establishments, they fringe on the idyllic by taking often trips to Italy, Switzerland and Pamplona, where they attend the annual San Fermin fiesta.

Slowly, but surely, the newlyweds are absorbed by the dazzling pace of life in the Roaring 20’s, which Hemingway pretends to despise, drinking and partying all day long. Their groups shift every season and the love triangles are pretty much accepted in their community. It is no surprise that our young artist ultimately falls in love with Pauline (who is also Hadley’s friend), in a perpetual search for admiration of his genius. It is vital to bear in mind that Hadley is 8 years older than her husband and that she is not at all modern. Hemingway’s attention in women’s fashion shifts from zero interest to choosing one of the most fashionable girls in their group.

Even though Hadley’s marriage with Ernest is doomed, their feelings are genuine as long as the relationship lasts, but I suspect it is only because he is deeply troubled and at first he is very much dependent upon Hadley.

I confess I am no fan of Hemingway’s (maybe except for A Farewell to Arms), but, reading this novel gave me a whole different insight into his way of thinking and writing. The Paris Wife follows the writer’s own style: simple, direct, unadorned and abundant in dialogues. It is a pleasant and easy read and I recommend it whether you are familiar or not with Hemingway’s works or life.