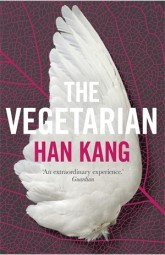 The Vegetarian is a story set in modern South Korea, a highly urbanized and industrialized country, with a focus on the deeply disturbed society having to deal with the colliding of the traditional ways of thinking in a globalized environment. The intricacies of the narrative reminded me of the Brazilian novel The Only Happy Ending for a Love Story Is an Accident placed in high-tech Tokyo, in the sense that it mixes up reality and fantasy in order to grasp the human endeavour of finding its place in the world.

The first chapter is a finely-brushed depiction of a domestic couple dealing with its everyday problems in a dull routine and settled-down acceptance that hints so abruptly to the Korean conservative conventions of marriage as a means of existence and not happiness. The tedious and simple couple life is seriously shaken up with Yeong-hye’s decision to give up meat and engage a vegetarian lifestyle which her husband, Mr. Cheong, disapproves of. Moreover, he sees his wife’s change as a deliberate attempt to hurt him, as women are not supposed to decide for themselves, let alone have such strong personal opinions:

As far as I was concerned, the only reasonable grounds for altering one’s eating habits were the desire to lose weight, an attempt to alleviate certain physical ailments, being possessed by an evil spirit, or having your sleep disturbed by indigestion. In any other case, it was but sheer obstinacy for a wife to go against her husband’s wishes as mine had done.

The bizarre atmosphere of this novel stems from the weird dream that determines Yeong-hye to become a vegetarian, but also from the first person narrative moments of hallucinations or visions drenched in blood that she undergoes all throughout her transformation process. The haunting images of these brief experiences are poetically vibrant, adding to the richness and depth of the text. As Yeong-hye struggles to accommodate with her new thoughts and emotions, she also has to deal with the social stigma of being a vegetarian, that is, a strange creature bordering on pariah, as this is how friends and relatives view her. The ostracism continues all throughout a business dinner with her husband’s manager, culminating with a family intervention where everybody treats her as an imbecile child – an ultimate spectacle of her father displaying a patriarchal behaviour and a merciless reminder of how she is supposed to have disgraced Mr. Cheong.

The second chapter is about lust and desire, self-discovery, inner demons and dormant feelings, portrayed through Yeong-hye’s brother-in-law first person discourse. The action is mostly hypnotic and twisted, overflowing with ardent desires brought to life through colourful body paintings. It was quite an unusual read, nevertheless intriguing and intense, mostly because of the writer’s (Han Kang) capability to create a palimpsest of erotically charged scenes in a non-pornographic way.

The last part of the book is narrated from In-hye’s (Yeong-hye’s sister) perspective, and focuses on her efforts to salvage her sister from starvation, while she tries to become one with nature, in an attempt to redeem her imaginary sins. Yeong-hye’s precarious state of mind is a catalyst for In-hye’s soul searching and making amends with a disturbing past dominated by her father’s abuses which she acknowledges only now: 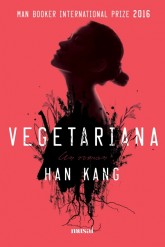 The feeling that she had never really lived in the world caught her by surprise. It was a fact. She had never lived. Even as a child, as far back as she could remember, she had done nothing but endure. She had lived in her own inherent goodness, her humanity, and lived accordingly, never causing anyone harm. Her devotion to doing things the right way had been unflagging, all her success has depended on it, and she would have gone on like that indefinitely, she didn’t understand why, but faced with those decaying buildings, she was never but a child who had never lived.

With a rather ambiguous ending, alluding both to death and revival, The Vegetarian is a powerful evocation of women’s role in South Korean society, but also an obsessive story about how one’s choices reflect in other people’s lives. The three-fold narrative, the dense and metaphorical phrases, make for an intense reading and a hallucinating experience worthy of the Man Booker International Prize that the book was awarded this year.