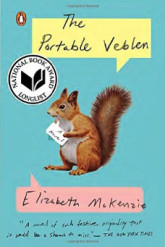 The Portable Veblen, shortlisted in 2016 for the Women’s Prize for Fiction and on the long-list for the National Book Award is a charming recount of a woman’s journey from childhood into adulthood, with an emphasis on how family relationships determine one’s future and happiness. Through a quirky, refreshingly weird character named Veblen Amundsen – Hovda, the author, Elizabeth Mckenzie, manages to create a novel and original book, which offers both a glimpse into the intricacies of human interactions, but also into the weavings of the pharma conglomerates.

Veblen, our protagonist, is an annoyingly optimistic, carefree-hippie-like freelance Norwegian translator, living in accordance with the precepts of life coined by her namesake, Thorstein Bunde Veblen, the Norwegian American economist who espoused anti-materialistic beliefs and led an uncommon and misunderstood life. Having learned about her mother’s obsession and hers with this great personality, her name choice no longer seems this weird and the significance of the title falls into place when learning that she used to carry around a portable typewriter when she was young. Of course, at a metaphorical level, the idea of a person being “portable” suggests the character’s ability to be pulled into different directions and people.

Elizabeth Mckenzie sets her story in Palo Alto, and follows the lives of Paul and Veblen starting with the scene of their engagement and moving backwards into their pasts, shedding light on those particular moments that defined their personality and development. It seems that every romance needs a troubled background and, in order to come to terms with the present situation, you need to dig up the skeletons. The clumsiness of the first dates, the fairy-tale like beginning when everything is perfect is slowly fading out into practicality and sensibility.

Paul is an up-and-coming researcher working on clinical trials on ex-soldiers who have suffered traumatic brain injury, while Veblen has no career ambitions and is very happy with her job as an office assistant. The question of social status is creeping in when faced with the dilemma of organizing the wedding and making plans for their future. Suddenly, it’s all about adjusting and settling with the engagement routine as getting to know each other takes a lot of soul probing and acceptance of the past.

Since when you marry you are offering yourself as a commodity, maybe it was time to clear up details of her product description. Healthy thirty-year-old woman with no college degree. Caveat emptor.

Another interesting dimension of this book and probably one of the most well-crafted is the family relationships one. Both Paul and Veblen come from rather troublesome, if not dysfunctional unions, and the acceptance of the in-laws does not come easily. The reunions where the fusion of the families is supposed to happen, are a vivid picture of all past ailments that have not been cured, starting with Veblen’s co-dependent link with her mother Melanie, and ending up with Paul’s festered animosities towards his brother Justin, who is mentally incapacitated. Melanie is an insanely exaggerated, hypochondriac woman, who develops a toxic affection towards her daughter, based on guilt and manipulations. Thus, it is no wonder that Veblen is on antidepressants and ends up talking to squirrels as a means of escapism from this world of sabotage that her mother has built around her all over the years. It is not easy for her to accept that Melanie is not a welcome addition into their couple life, but, eventually, she must come to terms with the painful reality and set herself free: “No one will ever love me because of her.”

In this funny novel, populated by squirrels carrying secret meaning, where the pages are full with photos of the most absurd things (gift baskets, bag of ugly clothes, extra chicken burrito, etc.) Elizabeth Mckenzie succeeds in painting an interesting canvas of a couple’s endeavour to sustain a relationship, while trying to heal old family wounds. The force of this narrative definitely resides on the delightful protagonist, but also on the freshness of its subject.